I was recently drinking coffee and making some observations on the system that the café used keep track of what people had ordered.

The weather was good and many (young-ish) people were there. The café was partly inside (ca. 30m²) and largely outside (ca. 100m²). The interior and tables outside looked relatively simple/improvised: There was no common type and no visible order, except that the tables were roughly the same distance away from each other

The café is a (semi) self-service one: You go to the counter and order. Then you someone brings the order to your table. When you place your first order, you get a card with a number on it. It is a sheet of flexible plastic with a sharpie-drawn number at the top right corner. I was asked where I sit. I said, “I don't know yet, but outside”. The person behind the counter was fine with that. After choosing a table, I put my card up visibly (by sticking it into a groove), assuming the card would somehow identify me as the person who ordered a piece of cake and a cappucino. 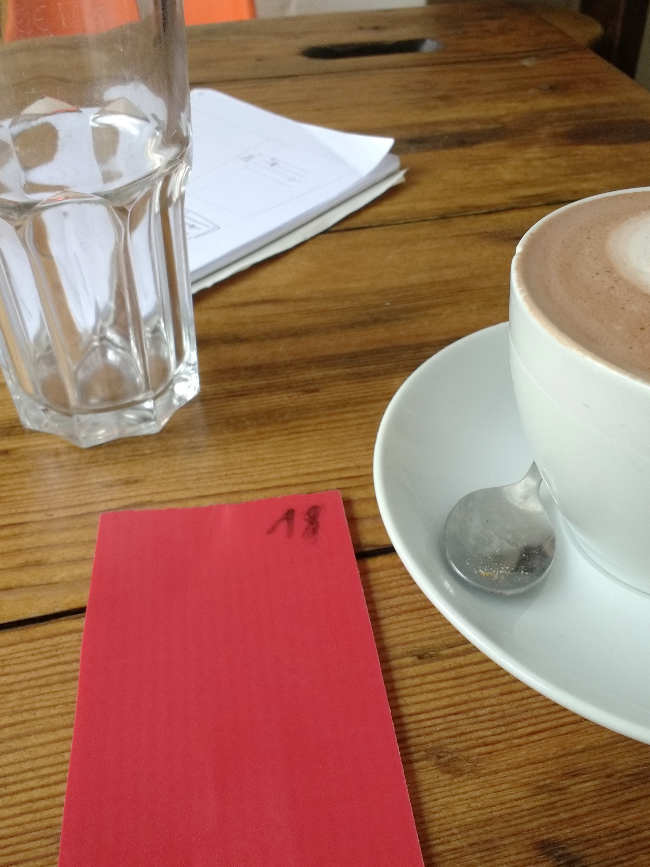 After getting that cappuccino and the cake, I changed my table to sit inside. After that, I went to the counter to get the next coffee. I was asked what my number is. I did not know it but seemingly, I should have known. I fetched my card from the table I had been sitting on before. I told the number. The person behind the counter was fine with it. I now got the impression that the cards were not markings for the tables. They were the numbers to identify the bills. This is what table numbers usually do, but here, it is more abstract. What I order is registered on “my” number and the number can move with me.

However, this system comes at a cost: When someone orders, one is asked: “Do you have a number already?”, since one could be a new customer or one coming for a second round. Also, it seems that the numbers might get confused. At least, I overheard the waiter telling the people who were ordering what is currently booked on their number. I was told (after asking about the number system and being asked which number I have) “This is two coffee, one hot chocolate, one piece of cake on the 18”. I interpreted this as a question and some sort of check and affirmed. Also, one couple did not know their number, so they reconstructed what they had together with the waiter. 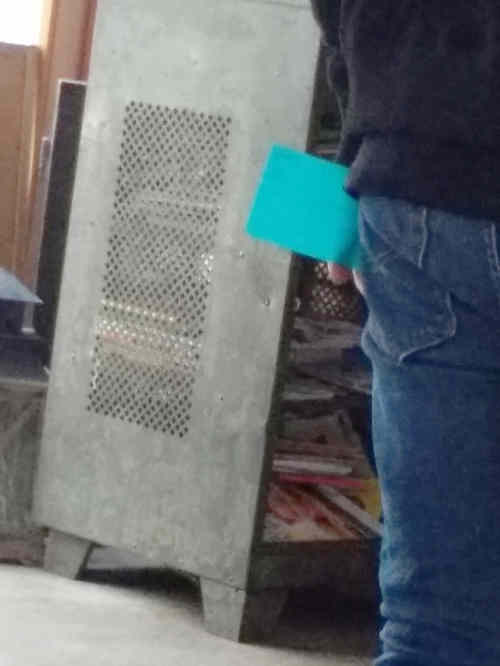 Image: person queueing to pay – the right way, bringing their card along

When asking about the system after ordering the second coffee, I was told: “It is like table numbers”. I asked: “But the tables have no numbers?” Answer: “No, they don’t here”.

When you leave the café (or, optionally, after you ordered) you pay by saying the number on your card and passing the money. I deliberately did not go with what I guessed was correct but waited to be asked. So I said “I'd like to pay…” and was asked “Which number?” I: “18!” waiter:“nn,mm€” I [paying] They: “Thanks”. I: “Thanks!… Oh, here is the card”. I used this to ask how they get back the cards: “Do you collect them?” The answer was ambigous: “The way you did it was correct” – so I guess there is an incorrect, but usual way, which is, leaving the cards on the table.

I did not feel that the system had been ingeniously planned beforehand. This also made made me feel less dumb for asking. The system, like the interior, had a feel of make-shift-ness. They might have introduced the system recenty, maybe with the iPad that was used to manage the bills and found that the new app needed numbers for identification.

Which number did you have? Minor observations when drinking coffee by Jan Dittrich is licensed under a Creative Commons Attribution 4.0 International License.