My initial attempts to learn programming start with not starting: My father encouraged me to learn to programming when I was 14. But he suggested QBasic and TurboPascal. I think his idea was that I would start with QBasic and then "graduate" to Pascal. I tried to learn QBasic a bit based on a book that walked one through developing a address database. However, this was not very motivating for me: The QBasic programs could not be started directly, but needed to be loaded in an editor before. Aside of that, I did not use an address database and even then there were plenty on freeware CDs that came with computer magazines. And these were “real” Windows applications!

I loved graphic design and 3D Modeling and other, more artistic uses of computers. So I guess the ability to do something visual and interactive was appealing about HTML and CSS.

Looking at my old files, it must have been 2005 or so when I learned to create websites in CSS and HTML. I don't know what motivated me. Maybe it was related to my interest in graphic design combined with a bit of background knowledge about web development that I picked up in computer magazines that my father read.

One source for learning was a brochure on HTML and CSS, a bit under 100 pages, I guess 1. The booklet showed how to create a simple website in HTML and CSS. However, I must have learned some HTML before. I remember since after working through the tutorial I did rebuild a website I created previously. It was using invisible tables before and I made it work with CSS alone as the booklet and some articles informed me that invisible table layouts are bad. At this time, using CSS only for layout was somewhat new and needed to be established so a lot of work of people went into telling others that they should stop using table based layouts. They convinced me, as you see.

Another source was the Website SelfHTML. It was like the German MDN, but I guess MDN did not exist at that time. It listed HTML elements, CSS and Javascript keywords, together with compatibility to different browsers and some usage examples. It was popular, well usable and it was available not only on the web but also as a zip file, so it could be read without internet access.

In 2006 I designed and developed a website during a 3 week internship. It was all manually coded as the company did not want to run a CMS and static site generators not existing yet or me not knowing about them.

I guess the work on Websites also exposed me to JavaScript. Some other factors might have been that

In 2007 I made my first (surviving) attempts to write in JavaScript, a game that I seem to have copied from somewhere. It generated a random number and asked the player to guess it, hinting if the number guessed was right or needs to be higher or lower.

In 2009 I try again by reading Javascript – the Definitive Guide. I tried to make sense of what is written in the book (I have the tendency to motivate myself, too, by reading books cover to cover, even if they are more meant to be reference works). 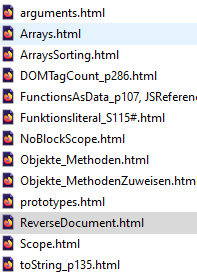 I have copied code from the book to try it out; a lot seems to be on how functions and method work, which is also one of the unusual (or rather functional-paradigm.-oriented) aspects of JavaScript.

A month later I order "ppk on JavaScript". This I remember as the book that made JavaScript "click" for me.

It seems I improved on organizing my recreations of code examples and added the page numbers to the file name. There are also more code I tried – over 60 snippets are in that folder

I also wrote my own comments in the examples, some with minor grammar or spelling mistakes – my native language is German, but as all instruction was English I kept writing comments in English.

The example with var evt = e || window.event also shows one of the disadvantages of learning JavaScript at this point of time: The browser implementations varied, so one needed to check which of two possible implementations of e.g. the event existed (here, it was either a parameter or attached to the globally accessible window)

Here some retrospective praise for what I assume made this book so helpful for me:

I remember some things that were confusing me as a beginner:

I continued using JavaScript ever since, learned frameworks like backbone and later vue.js and now play a bit with TypeScript. However, I think that it got harder to learn JavaScript today: Every 'serious' project today uses some sort of library which means you need webpack and npm and node and whatnot. This makes learning hard and the tools you need to wield rather unwieldy for a beginner 4. Today I would probably start with Python, I guess: Its usage demands less use of frameworks and libraries (though they certainly exist).

“Teaching yourself programming” as a genre (with problems)

Above story falls somewhat into a typical genre of personal lore of people in IT: “I taught myself X”. Professor of Computer Science Felienne Hermans has written about the problems of the “taught myself programming”-story on her blog: I am going to stop saying I taught myself programming when I was 10 and maybe you should too – and what I describe above falls (potentially) in this genre. Like Felienne, I want to point out that what I learned was not just “What I did” but also the context I happen(ed) to live in:

You could say that the first two points made it possible to get started with the learning and the two latter points made the activity itself somewhat meaningful to me. I never met the authors of the books, but they still were part of an ‘imagined community’ of people interested in similar things. Most importantly, having a friend being also interested in programming was a strong factor as I could talk with him about what I learned or learn from him what he did and follow that up (and thus create a topic to talk about more.)

To not leave you without further things to read, I want to point to some academic writings on the claims of being “self-taught”. In some communities being self taught is very important – and it can mean multiple things. One is the rejection of formal education, which can be often found in hacker culture 3. However, this is not constrained to classic “hacker” activities. Perkel and Herr-Stephenson research in an online arts community and describe : “…that using tutorials, even when a part of a seemingly self-motivated, “informal” learning, can be positioned in opposition to being self-taught” as they are not learning without help and on-ones-own 8. Lange describes how kids use and produce content for YouTube and finds that kids she talked to often downplayed the “social sources of support and direct assistance they received” (p.189) 6

This tendencies fit larger patterns of silicon-valley culture: Individuals, not groups or their institutions, are seen to drive change, free of hierarchies (see e.g. p38 in Turner, 2006 9) and charismatic technology enables self directed learning and tinkering (much like the technology’s creators prefer see themselves) 5.