In discussions about equity in the web and in technology I often come across two terms: Gaps and Biases. Sometimes they are accompanied by barriers. It is said that, to achieve equity, we need to close gaps, correct biases and remove barriers. 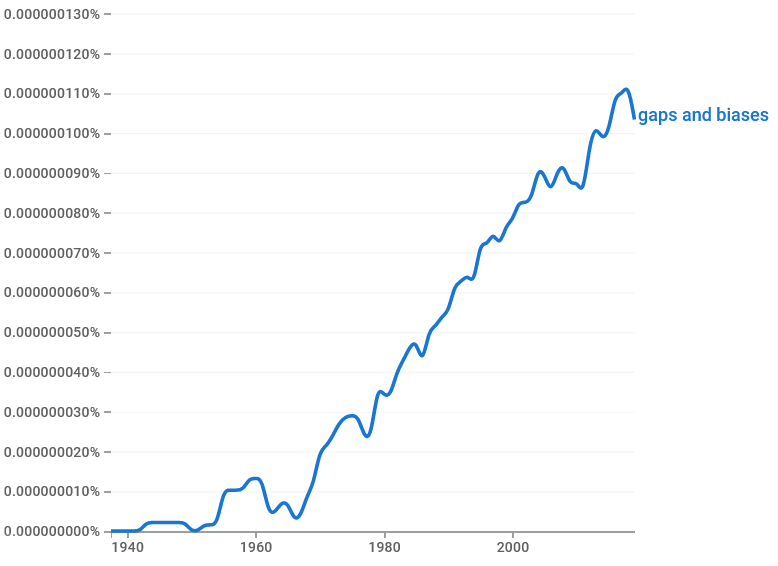 “Gaps and Biases” had quite a career since the 1940, at least according to the Google n-gram corpus.

Like any metaphor, gaps, biases and barriers highlight some aspect and tone down others. In this case it emphasizes problems that can seemingly be clearly defined and alleviated, while aspects that are political, messy and systemic are made less noticeable.

If the metaphors would suggest preferred it would imply that a preferred state needs to be choosen, making the process also a political question. However, the metaphors of gaps, biases and barriers imply an underlying ideal state, thus the problems are not a political failure but a failure to recognize the ideal, correct state and to act upon that knowledge.

The framing problems as being due to gaps, biases and barriers is compatible with the libertarian ideas in cyberculture 1 : It directs away from political action and messy negotiations towards a problem that is defined by referring a platonic correct state 2 and which can be rationally defined and solved.

This rationalist idea of ethics is analyzed by Abeba Birhane in her article “Algorithmic injustice: a relational ethics approach” 3, in which she focuses on ethics in data science and algorithmic decision making. She points out that “Any data scientist working to automate issues of a social nature, in effect, is engaged in making moral and ethical decisions” 3 and that “In a supposedly objective worldview, bias, injustice, and discrimination are (mis)conceived as being able to be permanently corrected. The common phrase “bias in, bias out” captures this deeply ingrained reductive thinking.” 3