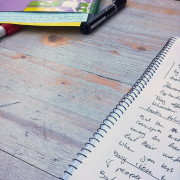 We held several sessions run by participants. I’ll give a brief summary here.

We started of with theory and philosophy of qualitative research. Actually our planning session kinda transitioned into it, so we used the opportunity and made this our first session after the planning.

The main topic was doing the ›right‹ research. There are several slightly different approaches of how you can show that you do your research ›right‹ and naturally different views of what ›right‹ means anyway. We brought in our approaches, discussed bringing in (or keeping out) personal views and interpretations, what one should state about oneself and one’s context and about the virtues of  describing messy realities or showing possible, plausible interpretations of experiences.

We talked about »defending the qualitative approach« too. The most common scenario is defending it against critique of quantitative researchers. However, the case we discussed was defending it against deconstructivist, postmodern critique (so that’s for those who already crafted the perfect defence against critique from quantitative researchers and feel bored now). After this rather abstract session we moved to a practical topic every researcher touches nowadays: Software. And literature (for some reason, I don’t know what the connection was)

For cutting videos participants suggested iMovie on Mac or ~~MovieMaker (freeware) for  Windows~~. Movie maker is not avaliable any more. Give Open Shot a try, which runs on Windows, Mac and Linux (2018/11/28).

For editing audio recordings – like cutting, or enhancing the quality – the Open Source Tool Audacity was used by participants

Adding notes and highlights to PDFs is possible via PDF X Change Viewer (Freeware). It includes a very useful ›OCR‹ Function to recognize text in PDFs which are created from scans (OCR-ing that scanned PDFs enables you to mark the text there too and to find the PDFs via your Computers full text search)

managing bibliographies and references: Citavi, Endnote, the Freeware Litlink  and the Open Source Zoterowhich integrates nicely into Firefox and Office.

Collecting Ideas  was done via the Open Source Zettelkasten, Open Source Freemind, the Freemium Webservice Evernote or Microsoft OneNote. However, Pen and Paper might be  preferable anyway for creative work.

LibreOffice, OpenOffice(both Open Source) or MS Office were popular tools for writing the  thesis. Some might try the Open Source classic LaTex as well, though this is probably to  much learning as long as your work does not contain math (which looks pretty in LaTex.

The mentioned books were:

After jointly collecting so many tools, we did a writing workshop (with pen and paper!). We first created a mind map of topics and than wrote for 10 minutes – without ever stopping, even if the writing seems stupid or whatever: just continue to write. After the 10 minutes we marked parts we liked about our own text, read them to each other and got feedback:
1) What they liked,
2) What they like to know more about,
3) Which color the text would have.

Thanks to everybody who participated for making this a very enjoyable event!