Actually, my workplace only has filter coffee from a pump pot. But early in 2018 we were gifted “fully automatic coffee machine” which its previous owner no longer needs.

Since I know the person who gifted it, I feel responsible and read the instructions: The machine needs water and coffee beans and turns them into coffee. Every now and then it has to be descaled, for which there is a descaling program. The machine, as it says in the instructions, will point this out to me in time.

Over the next few weeks, me and my colleagues get to know the machine better. It is difficult to choose the right cup size because the icons are misleading. A colleague solves the problem with a sticky note with better icons. Since the space is limited, the note is not placed directly at the corresponding buttons, but above another row of buttons and the display. 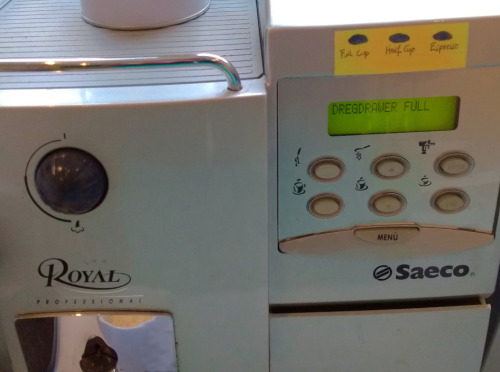 The fully automatic coffee machine can not only make coffee from beans, but also from powder, which should be put into a receptacle under a flap (according to the instructions). We use this function on a day with a severe shortage of coffee beans. Unfortunately, there is no result or maybe a mess, I don't remember. At least someone tapes the flap shut and writes “Don't” on another note to save future coffee makers from frustration.

We mainly get the machine to do what we want, initially, but over time, the machine makes us to do things it wants. One morning, at the push of a button, nothing happens. After thinking about it for a moment, it is noticeable that the display shows "Dregdrawer full". There are a couple of drawers, of which the coffee scraps drawer is the most promising. I empty the drawer, but still see the same message on the display; there is still no coffee at the push of a button. Open the drawer again, then put it back in. I carefully deviate from my solution and look deep into the drawer mount. Apparently the drawer only collects some old coffee grounds, the rest is scattered around it. I wipe off the coffee grounds with kitchen paper, scattering them on the floor. The warning disappears from the display and the machine cooks coffee again.

In a similar way and with similar consequences, the machine sometimes commands: “Ventilate”. Here, too, it doesn't make any coffee for my colleagues or me until we've helped it to “Ventilate”. Unfortunately, I do not remember what to do. I roughly remember that there were two things that could help here: the knob for frothing milk that nobody ever uses, and the hot water knob. I turn and push, it steams and splashes. The machine continues to ask: “Ventilate”. In the absence of alternatives, I continue doing the turning and pushing. In fact, the machine feels ventilated at some point.

The machine serves me coffee, I serve it, as indicated by the display with cleaning, pressing and turning buttons until it is satisfied.

This text was originally published in the Techniktagebuch on December 21, 2018 in German